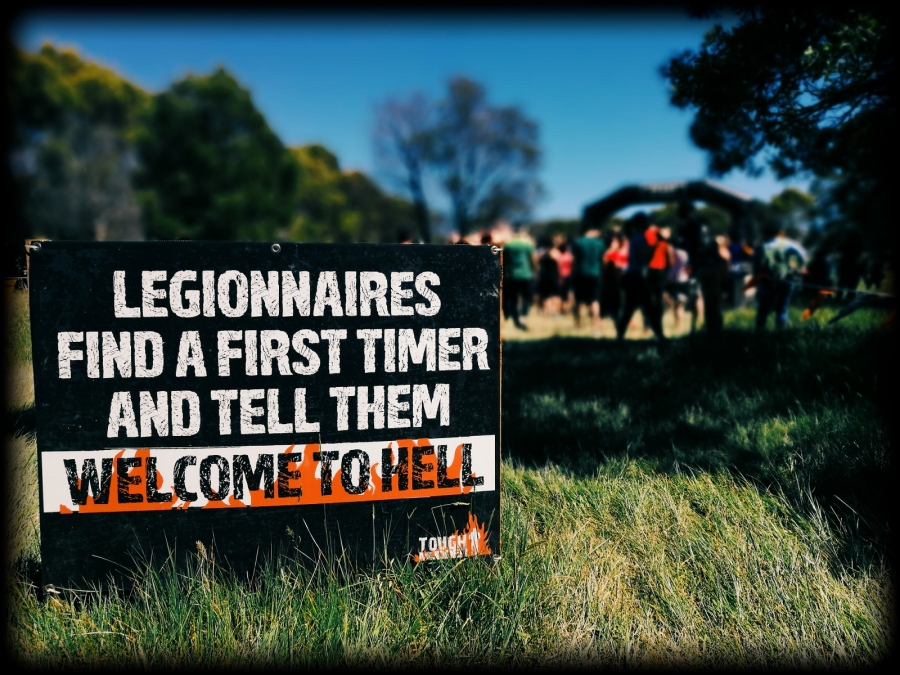 One of the many comforting signs

On Saturday R took part in the Tough Mudder Melbourne event. A 20 km course with 22 obstacles to overcome, many of which require team effort and a lot of prayers of “Please don’t drop them” from the sidelines. 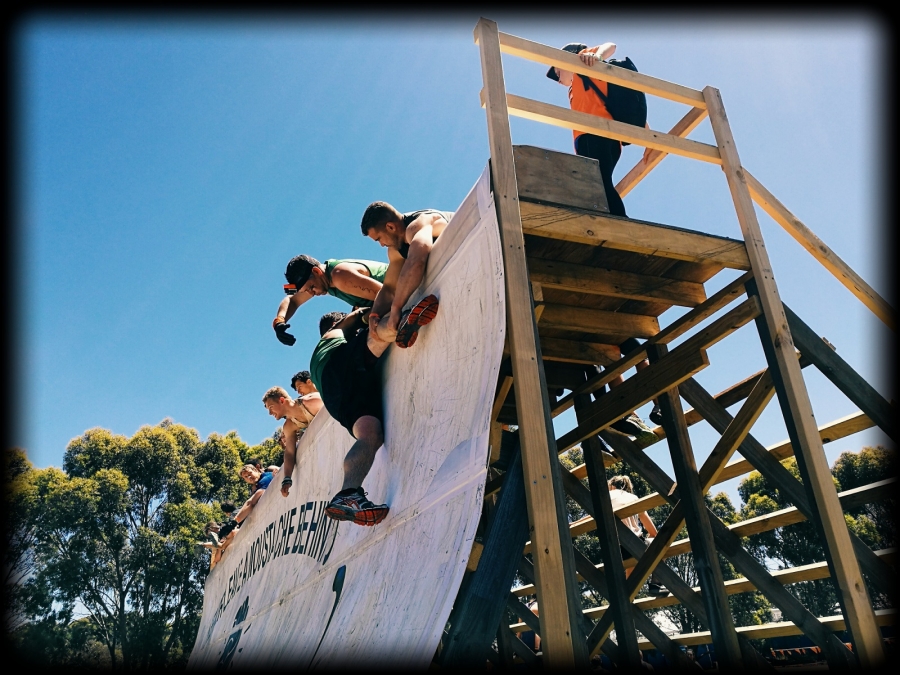 This ramp was high. Seriously high.

He was in a team with his brother, nephew, work colleague and a couple of his nephew’s friends. He has been training for the event all year, building up his running stamina and strength. 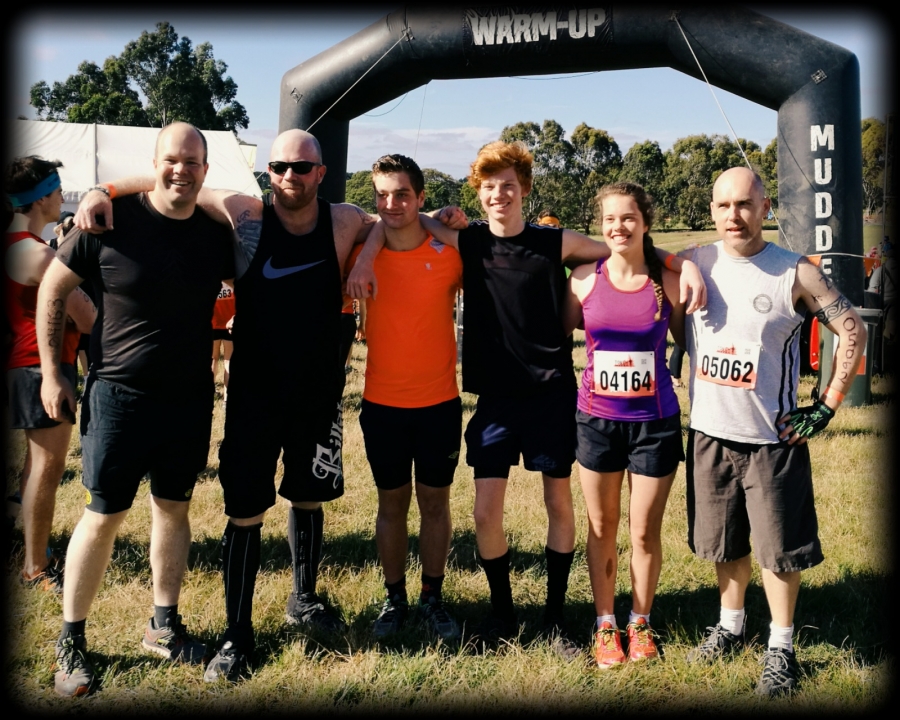 So shiny and clean at the start!

I hadn’t thought too much about the event until the night before, when reading through the waiver that I had to sign as a spectator. The waiver had some scary sounding clauses such as not being responsible for inadequate medical care, and a listing of some hideous-sounding injuries that could result from watching or participating. I suddenly had images of R injuring himself and being affected for the rest of his life. Let’s face it, we’re not getting any younger and at the moment life is so hectic with two Littles that we don’t ever spend the time on self-care, recovery or rehabilitation that we should. I was very relieved to see two ambulances on site when we arrived.

I was also a bit nervous as to how I would go, walking around the course with Monsieur and SnuggleBub in tow.

Loving the day out!

There were warnings on the website that the terrain would not be pram-friendly but you can never tell if they mean that it will be too rough and difficult even for an all-terrain pram, or if they just mean flimsy, designed-just-for-foothpaths prams. I can carry SnuggleBub in my carrier, however when I have to carry everything else as well, I have a limit of 1.5-2 hours before my back protests too much. The team were expecting to take about 3.5 hours to complete the course.

Sneaky foot trying to get some sun

I went with the option of putting the pram in the boot, going in with just the carrier and planning to go back to get the pram should the ground be okay. And that is exactly what happened. I did miss a number of the obstacles because it was a round trip of about 45 minutes for me to leave the course, return to the car, feed SnuggleBub and get back to whichever obstacle they were up to. I was wishing that I’d just brought the pram in to start with (I hated missing some of the obstacles) but it is far more awkward to be stuck dragging a pram around in an environment where it really shouldn’t be. Fortunately Monsieur was able to stay with his Aunty and cousins while I was doing that, so he didn’t miss out on seeing too many obstacles.

Giving the pram a good test – it passed with flying colours

Some of the obstacles looked hard and some of them looked downright scary. The last two obstacles I found the hardest to watch. One was a big curved wall, similar to a skate ramp, which participants had to run up and leap to grab the hands of other participants who were at the top and get hauled up over the lip of the ramp. Sometimes these people would end up with the arms and legs being held, their heads hanging upside down and all you could think is how bad it would be if someone got dropped. No one did (that I saw), but it was heart-in-throat watching. R made two attempts and both times I was so worried that he’d seriously hurt himself when he fell back down. I breather the biggest sigh of relief when he and one other team member elected to walk around that obstacle.

One thing I really like about Tough Mudder is that the emphasis is on supporting each other and helping each other through the obstacles. If you don’t want to do a particular obstacle, there are walk-by paths provided and if you need to walk some of the course, that’s fine too. R did note that there is definitely less enthusiasm from people to help guys like him and his brother who are tall and very solid whereas smaller people who were clearly lightweight generally had no trouble at all getting the help they needed. This is where it was great that R and his brother were doing it together as they are similar builds and both are strong enough to not be too worried about whether they would hurt themselves trying to help each other up.

Nearly half way there

See below for more photos!

The final obstacle was Electroshock Therapy. Basically they had to run through an area with live wires hanging down, trying to avoid getting zapped or tripping over hay bales. I have no photos but I did take the following video. R got zapped in the head and said that he couldn’t remember ending up on the ground. This obstacle is just for first-timers. Once you’ve done a Tough Mudder, you can do the alternative obstacle at the end. I am very glad that I’ll never have to watch that again. Oh yes…again. R has signed up to do it again next year!

« How is the botox for migraines working out? SnuggleBub at 10 months – new photos by Robert »